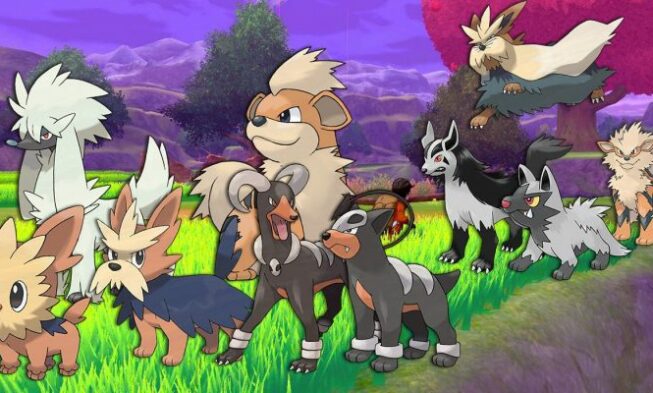 As a dog person, finding dog Pokemon is a crucial thing to do in my life. Well, I believe I’m not alone since you’re here trying to figure out how many dog creatures you can find in the universe of Pokémon.

The dog creatures in Pokémon are not too different from the real dogs.

What makes them a little different is just the fact that those dog creatures are way more fun, have super stuff and super powers, and also can fight in a different way from the dogs in our life.

Alright, so here are the entire 15 dog-like monsters you can find in the Pokémon world.

Rockruff is a mixed breed. It was created from the combination of Spitz dogs breed and the classic fox from Japan. This puppy is extremely adorable.

Rockruff has a combination of brown and cream colors on his body, making him look as cute as the real puppy in our world.

Rockruff is not the strongest dog for the Pokémon game. But he still needs to be in the first rank of this dog like monsters because of his cuteness and his appearance that is totally like my first puppy.

Does this cute guy remind you of someone cute around your life too?

Unlike the small breed Rockruff, Arcanine is a big dog. Arcanine comes from an evolved Growlithe.

Growlithe itself is a cute big puppy. Since the beginning, Growlithe was bred and also trained to be police dogs but not in real life, in the world of Pokémon.

To get an Arcanine, you must first raise your Growlithe and fight with him. Then use the fire stone on your little buddy.

Arcanine has solid stats and amazing offensive capabilities. This one gets his big names during the competitive scenes.

Zoroark and Zorua the Dog Pokemon

The next doggy foxy creature in the Pokémon world is Zorua and his evolution shape, Zoroark.

Zorua is like children; he loves playing pranks and disguises himself as the other things. He is also cute and beautiful. But he totally changes when he becomes a Zoroark.

Zoroark is a Pokémon of Illusion Fox. The small pranks he used to do as a puppy now become a big scale deception, thanks to the illusion aid it has.

If that skill didn’t work, he will use the amazing special speed and attack he has to take care of the situation pretty easily. I think I’m in love with this black dog.

Vulpix is a famous dog creature in the universe of Pokémon. And now there is a new version, the Alolan Vulpix. This variety is called Keokeo by everyone on the island.

Alolan Vulpix lives in communities in order to stay cold in an area with tropical weather.

Alolan Vulpix is able to exhale the air up to -60 degrees Fahrenheit. This white colored ice type Vulpix comes with a bunch of charm.

His white beauty reminds me of the snow fox or a white wolf maybe. You are going to love him in the battle.

If you prefer a husky or a wolf, you will love this Zacian. This Warrior Pokémon is categorized in steel and fairy type. This strong dog loves fighting with his pal, Zamazenta.

They both look similar; I believe they’re best friends. Zacian has two forms, first one is Hero of Many Battles and second one is Crowned Sword.

With a Rusty Sword, the Zacian will change from the fairy monster to fairy steel monster. Zamazenta and Zacian both have stellar stats.

However, Zacian’s stats are focused more on the offensive. This wolf is going to gain more popularity because of its awesome ability and useful skills for the battle.

Zamazenta is another wolf like Pokémon. This monster is dual type beast, fighting and steel. The stats of this regal wolf creature are incredible but focused more on the defense.

He also has the ability of Dauntless Shield that can raise the defensive advantage he has even further.

No wonder Zamazenta works best with Zacian. While Zacian focuses on the offense, Zamazenta helps by focusing on the defense.

You want them together for every battle and see what those wolves can do together.

Stoutland comes from a cute dog-like monster named Herdier. Herdier itself is inspired by a famous herding dog from the Kalos region.

This little guy is a Loyal Dog Pokemon because it has an awesome relationship with humans. When this terrier becomes a Stoutland, you’ll love him even more.

To make you sure that your Herdier is a grown up, he now becomes a Stoutland with a magnificent mustache that comes along with the dignified demeanor.

This bigger dog now has a great physical Attack and wonderful stats.

Want to see your Yorkshire terrier in the Pokémon world? You need to find Lillipup. Don’t you even think to underestimate this puppy.

Behind its small body, he has a huge bravery to face stronger opponents. However, he is also smart in running away when he faces serious danger.

Lillipup also loves playing fetch. But in this Pokémon world, you don’t have to throw anything. Your Lillipup is going to bring you some gifts he found around. What a perfect dog-like creature, right?

You can chase this dog around Johto. Suicune is a very elegant Pokémon dog. He wanders around the world to look for pure water.

He also purifies all the contaminated ponds. This compassionate monster has brilliant stats that focus on the defense.

Suicune has many moves that can help him win the battle against the bad monsters. His physical attacks will be Extreme Speed, Bite, Ice Fang, and Crunch.

Nickit was introduced as an eighth generation Pokémon with a mission to make the grass patches and forests in the region of Galarion come to life.

The look of this monster is like the European foxes. This is something new since most beasts have the design of Japanese varieties.

For those who love quiet and peace, Nickit is the right dark type monster. This creature has feet with soft pads so that he can walk without leaving a noise.

Well, it is not always good since Nickit loves using this ability to steal some food.

The next type of dog Pokemon is an evolution from Fennekin. We’ll talk about Fennekin later. I actually think this one is a little weird.

He looks like a dog but he stands on his two feet. To get this awesome monster, you will need to raise your cute Fennekin until the sixteenth level.

If you keep raising this weird looking dog like monster, your fire Pokémon will then be Delphox in the thirty sixth level.

If Fennekin and Braixen are both fire monsters, Delphox is a physic and fire Pokémon, with an even weirder look.

The Kalos region has a fire type Pokémon named Fennekin. This monster was introduced in the sixth generation. Just like Nickit, Fennekin looks more like a fox instead of a dog. Yet, this monster has the cute look of a puppy.

Fennekin is a little temperamental. He also likes setting things on the fire. However, you will love this cute puppy since he loves munching on the wild twigs.

Entei has the ability of a big dog that will destroy the enemies such as the high speed movements and the pummeling attack.

Zigzagoon is actually a raccoon but this peaceful Pokémon animal doesn’t remind me of the real life raccoon.

Zigzagoon has not so brilliant ability for battles. However, this is a cute creature with a unique zigzag color on his body.

There are two forms of this raccoon. First one is the normal type Zigzagoon that has a light brown and dark brown zigzag motif.

And there is the Galarian Zigzagoon which is a dark and normal monster. This one has black and white zigzag on his body.

Finally, there is Smeargle as the last dog Pokemon. Actually, this little buddy doesn’t look like a puppy. Smeargle’s other name is Painter Pokémon.

He is a bipedal creature that is based on dog shape and is capable of painting beautiful artworks using his tail. This monster is inspired by a beagle.

This monster’s name, Smeargle, is originally from a combination of beagle which is a dog breed and smear which means spreading something.

What a perfect name to explain what this monster does, right? There are still many other Pokémon dogs you need to know.

For example, there is Electrike, Manectric, Poochyena, Mightyena, Snubbul, Granbull, Furfrou, Houndour, Houndoom, and so on. They are all inspired by real life dogs. Can you find them all?