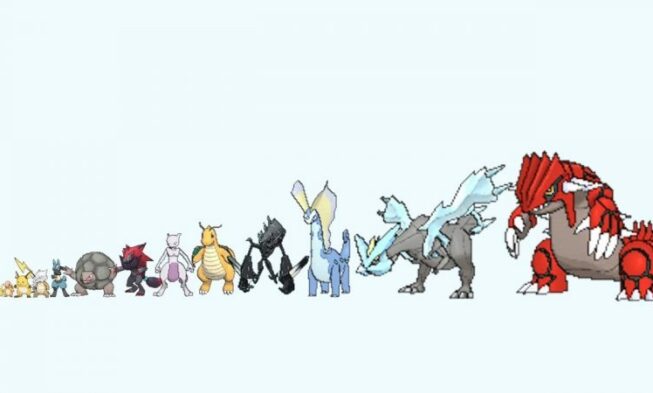 Heaviest Pokemon – I don’t understand why people need to know some details that don’t seem important such as the weight of Pokémon.

You and some other people who are curious about the heaviest Pokemon would be here, trying to find the complete details about some Pokémon and figure out if your favorite is one of them.

Well, if you still need the details about some heaviest and biggest Pokémon and their weight, you’re about to see 15 Pokémon that are all categorized as the heaviest ones. Try to find your favorite one in the list below.

If this is your favorite Pokémon, congratulations! Your Ultra Beast Celesteela is on the very first rank. The weight of this Pokémon is 2204.4 lbs. or 999.9 kg.

Celesteela has the look that combines the Space Shuttle and the Japanese lady wearing traditional kimono.

Celesteela comes from the story of Japanese Princess Kaguya, who was born on a Moon and then sent to the Earth by using the bamboo shoot.

Since Celesteela is inspired by the oldest story in Japan, no wonder that it is heavy since it is carrying the literary tradition weight on its shoulders.

Cosmoem, which also has Protostar Pokémon as its name, holds the universe’s infinity. Its weight is just the same as the first one above: 2204.4 lbs. or 999.9 kg.

Cosmoem is the Psychic type Pokémon that may look cute and a little silly. What is fun about it is the height. Its height is just 10 cm!

The cute tiny star ball has accumulated the energy and then grows heavier. It worked hard so that it will be able to evolve into Lunala or Solgaleo.

Due to the temporal form of Cosmoem, it gets the second rank since its weight will lose after the transition to the next stage.

As the Continent Pokémon, Primal Groudon is now angrier, bigger, and comes with more power that it can use to reshape a land quickly, raise the continents, and expand them all.

Primal Groudon is a Fire or Ground type Pokémon which is the coolest one. Many people love this one, are you one of them?

Primal Groudon may be equals with the other Pokémon in the same type in the terms of general strength and power. But this one is definitely heavier than Kyogre.

Pokémon’s Galar region comes with a bunch of mysteries and secrets, including the Gigantamaxing or Dynamaxing phenomenon.

And the heaviest one in this region is our famous Gigantic Pokémon, the Eternatus. Its weight reaches 2094.4 lbs. or 950.0 kg.

This Dragon and Poison Pokémon arrived in the Galar region about twenty thousand years ago. It was sealed inside the meteorite.

Nobody knows where it comes from. Its weight combined with the height that is more than 20 meters, actually has less to do with the composition or power. It is just about the size.

For a monster that is designed to bring some different world’s land masses into existence during the battle against bad Kyogre in order to over control the nature forces, Groudon’s weight is pretty cool.

Unfortunately, Groudon has fallen asleep for ages. It sure cannot do some things while sleeping such as lifting things, eating, and training.

That’s why this Pokémon is on the fifth rank, after the Eternatus even though both of them have the same weight.

The weight of this awesome Iron Leg Pokémon is 2078.7 lbs. or 942.9 kg. This monster is the evolution from the Metagross.

The treatment of Mega Evolution is given to Metagross in the Generation VI. How do you get the massive beast? Let me tell you the secret.

You need to combine one Metagross with one Metang along with two linked up Beldum.

This combination is going to give the Mega Metagross the brawn and smarts of the eight Beldum in a perfect unison.

Unfortunately, the incredible intelligence of this new monster will make this Pokémon much crueler.

This sturdy horse comes with heavy substance and ultra-hard legs covers that are made of a mixture of the monster’s saliva and some mud. Sounds disgusting, isn’t it?

But those awesome legs allow this heaviest Pokemon to use the back legs in dealing devastating damage.

This monster is incredibly heavy so that it can destroy all hard surfaces such as asphalt. I believe this monster is not allowed to travel on public roads.

This Junkivore Pokémon is the next Ultra Beast that is nominated as a heavy Pokémon. Guzzlord’s weight is 1957.7 lbs. or 888.0 kg.

Just like many other Ultra Beasts, this Pokémon has a special design that is different on the fundamental level compared to the other normal monsters.

This Dragon and Dark type Pokémon has become heavy and big because of the ability it has to eat whatever it finds.

It will eat literally everything, including run down cars and rusty tools. Guzzlord spends a lot of time eating. A research conducted found out that this monster is always hungry.

Not only considered as a monster with awesome weight, Stakataka is also considered as a guest from the other world which accidentally wandered into the Alola but with the most inorganic look.

This one of the Ultra Beasts is introduced in the Generation VII as a Rampant Pokémon. The mysterious stack with four legs here is actually a block stack that is a combination between some life forms in smaller size.

It has numerous shiny eyes around the body.

Our Hex Nut Pokémon, the Melmetal is less gracious than the Zamazenta. But this monster is heavier than and as powerful as the Zamazenta.

Its weight is 1763.7 lbs or 800.0 kg. That wonderful weight comes from the mercury that builds the body of this monster.

However, the weight of one liter mercury will be about 1400 kg. Probably, this tenth of heaviest Pokemon has less than one liter of mercury in its body.

On the eleventh rank of the heaviest monsters, there is Zamazenta, a heroic monster of the legend that is said to have protected the region alongside the Galarian king.

The weight of this awesome figure is 1730.6 lbs. or 785.0 kg. People are expecting many things from this awesome monster.

The weight of Zamazenta is perfect for its position to guard both Pokémon and people’s realms. As a shield, Zamazenta is required to withstand all and any blow without flinching.

It is also more dangerous in the Altered Forme. Every single gram of this violent Pokémon is its weapon to crush the enemies.

Giratina which is a Dragon and Ghost type Pokémon has another name; Renegade Pokémon because of it has unruly tendencies.

Steelix is not categorized in the top 15 heaviest monsters. But the Mega Evolution makes Steelix deserve the thirteenth position since the evolution creates a Mega Steelix which is 1631.4 lbs. or 740.0 kg weight.

Thanks to the glimmering spikes that grow along the Mega Steelix’s body.

The transformation of Mega Steelix comes with the considerable mass increase. The cooler design, sharper edges, and the high stat in Defense, this Ground and Steel type Pokémon becomes one of many people’s favorite.

Dialga is a Temporal Pokémon that the weight is1505.8 lbs. or 683.0 kg. This monster is a Pokémon Arceus that was created to carry the history and years’ weight.

This beast was introduced as Pokémon Diamond’s main Legendary with its body that looks like it is made of metal and hard materials.

Copperajah’s weight is 1433.0 lbs. or 650.0 kg. If you want to get this monster to win the upcoming champion of Poké-Sumo, you need to travel to Galar where you can find it.

Copperajah is a Coppererm Pokémon which is an elephant with a metal plate. This monster is an absolute pure chunkiness.

The Steel type Pokémon here is an evolution from the smaller and cuter monster named Cufant.

After the evolution, Copperajah becomes a force that is unstoppable with insane HP and greater Attack. What makes Copperajah more interesting is its ability of the Heavy Metal which doubles Pokémon’s weight.

Those are all 15 of the heaviest Pokemon. Is your favorite Pokémon on the list? Mine is not. My favorite one is Wailord which is inspired by the biggest and heaviest animal, the whale.

Wailord is just 877.4 lbs.or 398.0 kg. I expected Wailord to be as heavy as the whale but it looks small and cute as a monster.