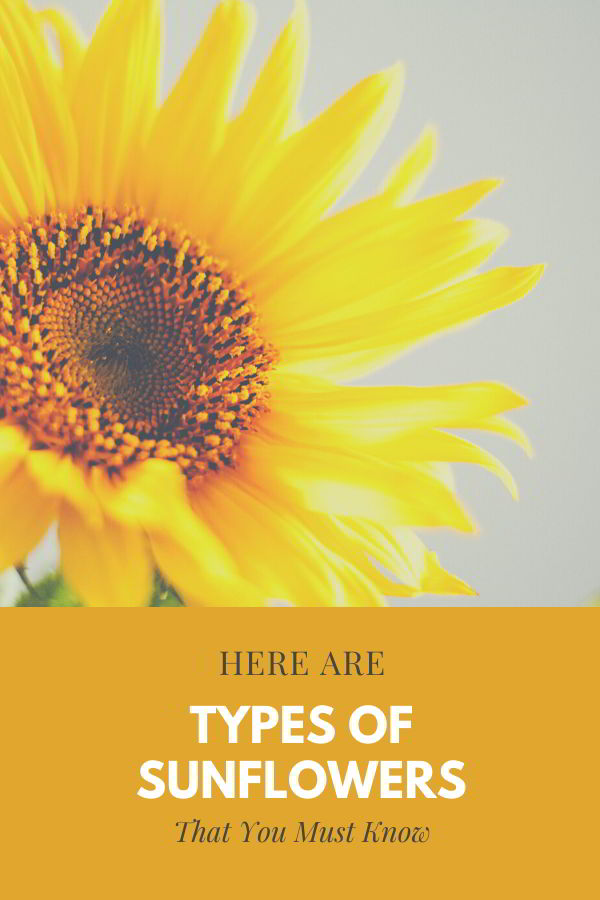 Sunflowers are without a doubt among the most popular plants. They are bright, just like the sun, look amazing, and also edible. What is interesting is that there are many types of sunflowers.

That’s right. The common sunflower, Helianthus annuus, is just one among many types.

Sunflowers are native to North America. Their popularity is not limited to the region, however. If anything, the flowers have been quite popular around the world.

These flowers are predominantly cultivated for food, albeit being edible is not the only thing that they offer.

Speaking of taxonomy, these amazing flowers belong to the Helianthus genus, the term which almost a direct translation of the Greek words for sun (“helios”) and flower (“antheia”).

Interestingly enough, no one knows for sure why the flowers are named as such.

Sunflowers typically grow quickly from seed. Oftentimes, they can grow many flower heads per stem.

At first glance, you might find their leaves look like that of weeds. You are correct. In fact, some people consider common sunflowers to be a weed as these plants can grow and thrive easily.

In total, there are more than 70 cultivars that make up the entire Helianthus genus.

These cultivars can be divided into three groups based on their characteristic: giant, dwarf, and colored. In this post, you will learn some examples of the first two groups.

Giant sunflowers are a sight to behold. They are beautiful and can grow to staggering sizes. The tallest ever recorded grows to 30 feet 1 inch.

The typical giant sunflowers don’t reach this size, but they are still large. You can expect them to reach between 10 and 12 feet.

Dwarf sunflowers, on the other hand, are much smaller in size. Despite their small stature, they require the same care as giant sunflowers and look just as beautiful.

Below, we listed 7 of the most amazing sunflower types. The first 4 are the larger varieties while the last 3 are the smaller varieties.

Although their sizes are different, they are all stunning. So, ready to get to know these amazing flowers? Let’s get to them right away.

At first glance, the Giant Sungold looks rather similar to the Teddy Bear. That is true.

The two, however, are different. You can notice here that the Giant Sungold variants have not only dense layers of petals but also deeper fluffy golden heads. The two differ in size, too.

American Giant Hybrid varieties live up to their name. They are giants. They typically grow between 10 and 16 feet. Some of them grow even taller than that.

They are not just big. They are also beautiful. Notice the beautiful contrast between its dark brown face and bright yellow petals.

The Skyscraper varieties are also among the tallest types of sunflowers as they typically grow to between 12 and 14 feet.

They have impressive flower heads, which can span 16 inches across. The flower heads have dark orange to brown center with bright yellow petals circling around them.

Although not as large as the American Giant Hybrid and Skyscraper varieties, the Russian Mammoth varieties are still large for sunflowers.

They typically grow to between 9 and 12 feet. However, unlike the American Giant Hybrid and Skyscraper varieties, the Russian Mammoth has deep yellow petals and orange-brown centers.

If you are looking for sunflower varieties that look fluffy and cute, look no further than the Teddy Bear varieties. These varieties don’t look like the typical sunflower.

Instead, they fluffy yellow to orange heads. Unlike the Giant Sungold, these varieties can only grow between 16 and 24 inches.

Perhaps you are looking for a variety that doesn’t look like a common sunflower but still as beautiful? In that case, the Firecracker varieties might be ideal for you.

These varieties have a “ring” in their heads. They have yellow-orange petals and dark chocolate centers.

Lastly, the Elf. These varieties look identical to common sunflowers as they have the same bright yellow petals and brown centers.

They differ only in size. As the Elf typically grow to only 14 inches, you can say that they are the miniature version of the common sunflowers.

There you have it. The above are 7 of the most amazing types of sunflowers. What do you think? Which types of the above pique your interest the most?